Following in the footsteps of Bill Stone’s 1984 expedition, I was part of a team returning to the remote resurgence of the Cueva de la Peña Colorada. The expedition lasted two months with explorers from the United States, Australia, Poland, Canada and the United Kingdom. I was on site for about a month, just in time for when things really started to get interesting… 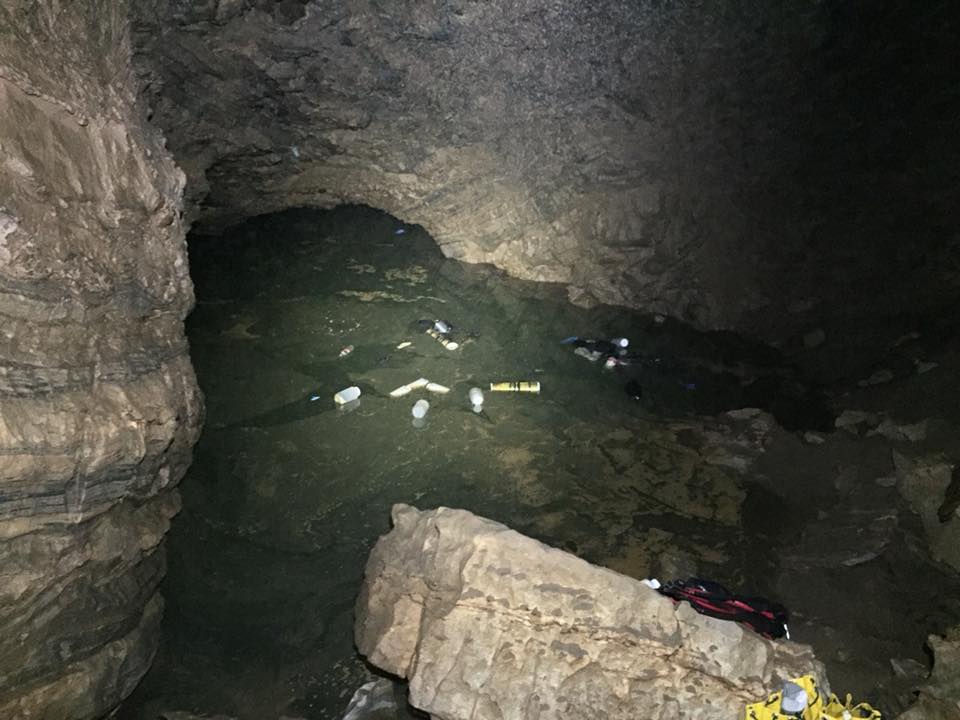 My view when I arrived at the start of sump three..

After a foiled first attempt at making my way into the cave I headed back into town to talk with some divers who had just come out after a long camp underground. Their description of the route to camp one made it sound easy, so armed with some good beta and a map of the passage I set off to traverse the canyon approach, two sumps and few hours of dry caving alone. In the 2 day delay it rained quite a bit which is unusual for this time of year. The trip through sump 2 was easy and I was soon on the far side carrying two composite cylinders, dive gear, SRT kit, camping gear and two Nalgenes full of food and batteries to resupply the six cavers currently living in the cave. The passage between sump 2 and sump 3 requires a lot of scrambling through breakdown piles in some impressive cave. Slowed down slightly by the two bags I was carrying I made it to sump 3 in about 30 minutes. When I arrived I was a little taken aback by all of the Nalgenes floating in the sump pool. Then I heard the unmistakable sound of a solenoid firing and saw Tomasz’s SF2 rebreather floating amongst the debris. Shit! Big problem. My immediate concern was related to the dive guideline- missing somewhere in the flooded sump pool. As cave divers we use a line that starts in open water (or in dry space when sump diving) and is continuous throughout the underwater portion to guide us in a no-visibility situation. I knew there should be a team coming out today and I wanted them to have a continuous guideline all the way out of the sump. I had no idea just how far the sump water level had risen and having never been at sump 3 before had no idea where the line was tied off. My first attempt at finding the line involved wading in the shallow end with a mask a light, hoping it was close. I soon added both of my tanks and tied in the only safety spool I had and began a lost-line search. My 75’ of line was quickly exhausted as I swept from side to side, finding dive gear strewn across the bottom but no guideline. At one point I moved a composite cylinder I had found onto a shelf at water level, as a visual reference marking the point where I had found most of the submerged gear. I moved to the other side of the passage and tied off at the water line, giving myself as much reach as possible. I recovered a few climbing ropes that I could use to extend my search area but before I needed to resort to those measures found another line spool on the bottom amongst the submerged gear. Using the second reel tied into my first I quickly found the guideline and tied in. The primary tie off which had (for many weeks) been in dry passage was now approximately 30’ deep and at least 75’ into the sump. I spent some time recovering gear and moving it to much higher ground, then extended the new guideline another 75’ into dry passage for good measure. After recovering all of the floating and most of the submerged gear I filled a dry tube with Nalgenes to resupply the others and set off alone into sump 3. During the 15 minute traverse I noticed some mild narcosis which was notable since the passage was supposed to be ~65’ deep. I didn’t carry a computer to save weight (the initial sumps were shallow and needed no decompression) but figured the sump had to be around 90’ deep. After a while I arrived at the primary tie off on the far side of sump 3 which much to my disappointment was also under a significant amount of water. Having used all of the spools I carried or could find I was faced with an easy decision: surface and hope the tie off had been placed in an area that would still have air space above it (and risk losing the line) or turn around and head all the way back out. I made the obvious choice and turned back, leaving a dry tube with food and batteries tied off on the line….

After exiting sump 3 I made it back through the dry passage, sump 2, dry passage, the canyon and back to base camp in about 5hrs. I carried 4 tanks to the jungle compressor along the way so that myself and another diver would have gas for the rescue that we would need to undertake. After arriving at camp I spoke with Charlie and Tomasz and the three of us decided to wait, anticipating the water would go down. In two days I would dive through sump 3 with a few reels, extending the guideline back into air space and then making my way to camp 1 to check on everyone. We figured everyone was fine, well supplied and working hard to move gear from sump 7 back to sump 3 while they too waited for the water to go back down. After waiting two days I returned to sump 3 and noted the water had receded a good 25’. I made the dive alone and extended the guideline on the far side, surfacing in a huge air chamber with 6 headlamps staring back at me. Mirek was the first one I spoke with and he gave me a brief synopsis of their experience: “Three days we’ve been stuck in an air chamber, no food and only one space blanket. We’re getting out right now”. With that Mirek disappeared into sump 3 and began making his escape.  As the others rappelled down the 60’ pitch directly into the sump I got more and more details of the story. Apparently 3 days ago the water began rising at an incredible rate and the 6 cavers were forced to abandon their camp and dive gear, running to higher ground in the Whacking Great Chamber. The trapped included Matt Vinzant, Gilly Elor, Zeb Lilly, Andreas Klocker, Dane Motty and Mirek Kopertowski. There for 69hrs they shared 4 bars and one space blanket, huddled together for warmth. With a stroke of genius in their flight to higher ground, Zeb placed a guideline through some of the lower section. It was this guideline that Mirek would eventually follow as he freedove through 60’ of sumped passage to their dive gear. Mirek then brought a tank back and the other 5 were able to escape through the sump. Within a half hour of making my way to the far side of sump 3 (with the intention of spending a week underground) I was now the last diver swimming towards the exit, the 6 hungry divers ahead of me. We hiked all the way back to base camp and they all had a very well deserved meal. 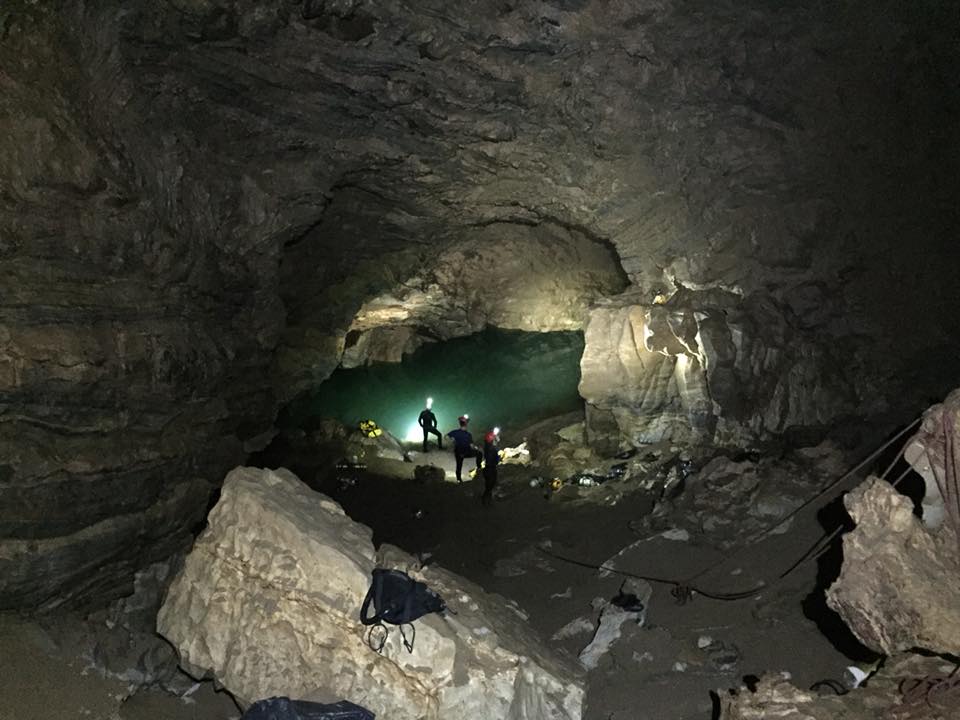 After a day of rest we returned to sump 3 to continue recovering gear. It had now been 5-6 days since the big rain and the difference from my first time here was staggering. The water level had returned to near normal, down a full 30’ from less than a week ago. I took a photo in the same spot as my first, showing just how far the water had come down. Funny enough the tank I had place on a shelf at water level was now suspended up on a wall, far out of reach. A great testament to the flood that had made the last week so interesting for all of us. The biggest irony in this whole adventure was that as everyone else had been trying so hard to get out of the cave, I was trying just as hard to get IN! 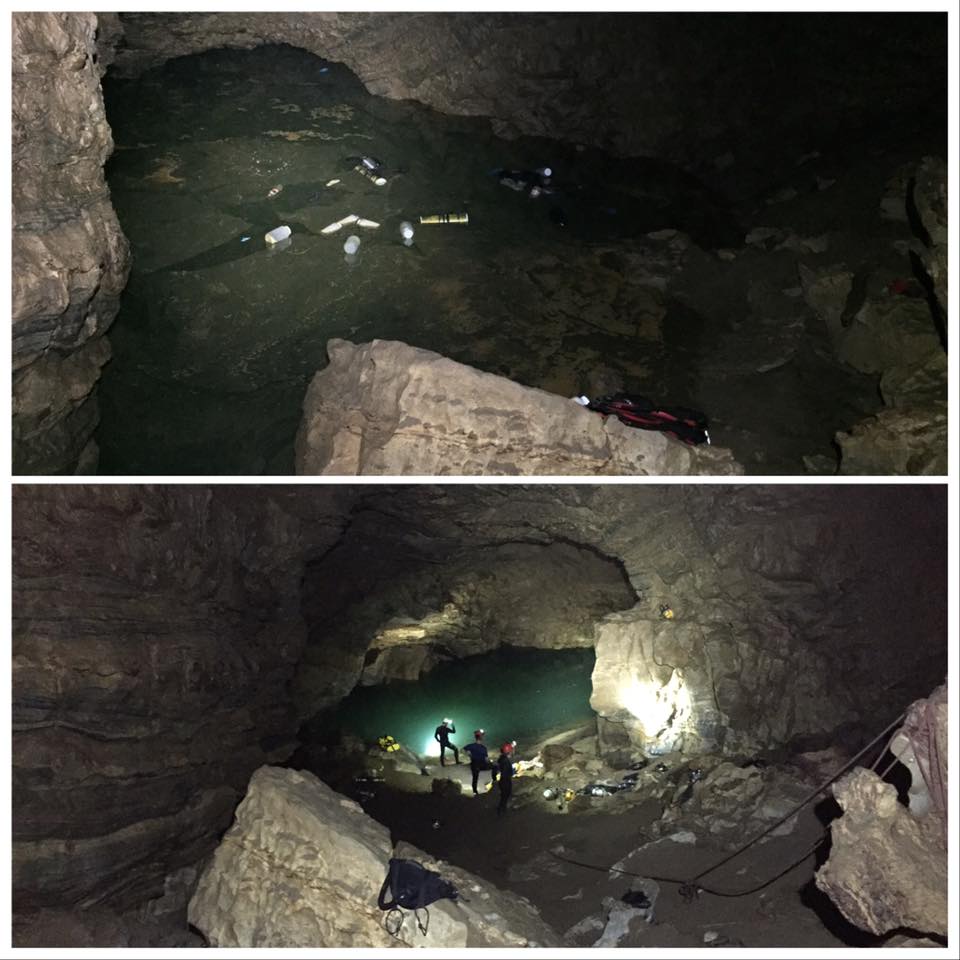 A before and after of the exit-side of sump 3. During two days of rain the water level had risen about 30’, trapping 6 cavers for 3 days beyond the sump. Matt, Gilly, Zeb, Andreas, Dane and Mirek made it 69hrs with 4 snack bars and a space blanket.

More on the expedition can be found on our team website, Beyond the Sump